This section contains various examples written in MaxScript and Python. We've left out some parts of the scripts to keep things as simple as possible.

To run Simplygon, simply execute the sgsdk_RunPipelineOnSelection along with a Pipeline settings-path or Pipeline settings-object. A Pipeline contains the settings that Simplygon will use during optimization, much like SPL (8.x) and INI (7.x). The optimized result will be returned to Max as soon as the processing has completed.

# Mapping data for Import and Export

Some data is incompatible with Simplygon's scene format, such as animation (key frames). To tackle this during manual export and import we are storing some mapping data that makes it possible to preserve this information, this data will reside in memory until manually cleared. Clearing global mapping before an import will result in meshes and materials getting imported solely based on the data in the file. Clear the global mapping manually, preferably before each export.

Take the example below where we first export a scene to file, then import it back into Max. During export we store mapping data for meshes and materials (guid mapped). At import we do a lookup in the mapping data and if we find a match we can copy rendering properties and link bones more accurately.

To gain more control of Import we have exposed two flags, LinkMaterials and LinkMeshes. If LinkMaterials is true we will try to do a lookup in the global mapping, if any, if there is no hit we will do a name based search. If a match is found we will link the existing material(s) to the imported mesh(es). If LinkMaterials is false then new materials will be generated and applied to the mesh(es).

If LinkMeshes is true we will try to do a global lookup, and if that is not working then we will do a named based search. Non-existing mapping may result in loss of data, for example rendering properties and skinning / key frames. If LinkMeshes is false the imported meshes will be considered new meshes, Reductions will not be able to map back to the original hierarchy as an example.

To export selected Max assets to file, use sgsdk_ExportToFile followed by the output file path. Export is compatible with flags that modifies the output scene in any manner, such as example shading networks and material overrides. The exported file will be saved as Simplygon's proprietary file format.

Export selected Max assets along with its textures to file using the CopyTextures flag. Textures will be exported to a sub-directory named "Textures" located in the same directory as the output scene file, in this specific case "D:/Exports/Textures".

To import a previously saved file into Max, use sgsdk_ImportFromFile followed by the file path.

Note: The importer is part of the standard Simplygon pipeline (export -> process -> import) and can not create complex materials. New materials will get imported as Blinn / Phong with one (the first) texture available for the given material channel. For complex (node-based) material import we recommend a manual approach.

Renaming of processed / imported meshes can now be done by using sgsdk_SetMeshNameFormat. {MeshName} and {LODIndex} will be replaced internally if present. If meshes with the given name already exists they will get assigned a new indexed name, usually the original name appended by a unique number.

As scenes can be exported and imported in an unordered manner we've also added sgsdk_SetInitialLODIndex which specifies the starting index for LODIndex. So if you want to import a scene from disk and want to use LODIndex = 5 for all meshes found in the scene, that is now possible.

We've added the function sgsdk_RunPipelineOnFile to allow users to be able to process scenes from file. The InputSceneFile flag specifies which file to optimize while OutputSceneFile specifies the target file path of the optimized scene.

Simplygon writes down custom attributes for each mesh transform that can be used to calculate the recommended LOD-Switch distance. The attributes are MaxDeviation which indicates the pixel deviation compared to the original asset, and SceneRadius which is the total radius of the scene that was sent for processing. All meshes processed at the same time will have the same attribute values, thus also switch distance. MaxDeviation is currently available for Reduction and Remeshing. Aggregation do not have a switch distance as all it does is to merges geometry (and possibly materials), in this example the MaxDeviation gets set to 0 where the attribute does not exists. 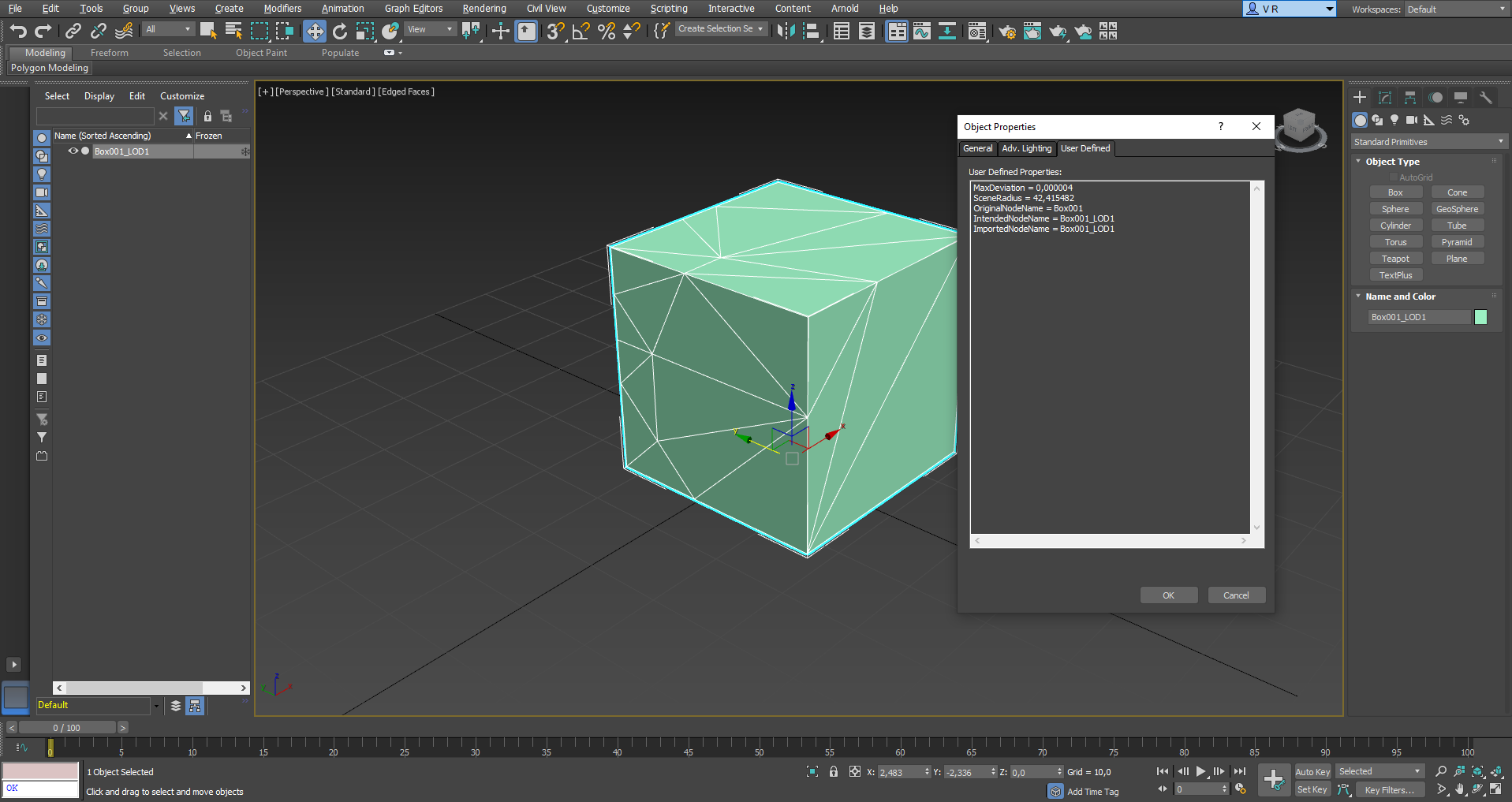 To calculate the switch distance you also need to take a few other parameters into account, such as resolution and field-of-view (FOV). See the formula below (there is a more detailed description in the API documentation).

Please see the Pipeline documentation for more information on how to set specific settings parameters.