The Impostor processor replaces the scene with one or many billboards. The impostor type determines which type to create.

The geometric details will be mapped as textures to the impostor planes. All material channels can be casted to it: Diffuse, ambient and specular textures etc. The normal map will contain information from both the original normal map and the geometry. An opacity channel will represent the gaps and holes from the original scene.

This mode is best suited for assets with planar parts that have lots of non-connected geometry such as fences or cages. The static billboards will be fitted to the exterior hull of the scene. The reason why disconnected geometry is good is because it's not easily optimized by just reducing it. The reducer would normally either create larger holes or have the holes filled and have the results become too solid. The reason why parts of the geometry should preferably be as planar as possible is because the distance from the original to the projection can then be minimal. The billboards are not optimal for replacing large curved objects.

Here is a clarification of the geometry on the original objects by zooming in. The Foliage mode takes vegetation type assets and replaces them with a set of billboards that aims to maintain the visual perception of depth and volume regardless of view direction. The billboards fit to the entire volume of the scene as opposed to the Outer hull mode. This mode is better for chaotic meshes that has lots of geometry within its volume, like vegetation. The foliage mode can divide the vegetation asset into a trunk and a foliage part based on a few user parameters. The trunk geometry will retain the original materials and have its triangle count reduced. The foliage part will be replaced by a set of billboards that receives a newly generated material.

The generated material for the billboards. There are a number of settings that determine the complexity and the quality of the optimized vegetation such as the billboard density. The billboard density value determines how many billboard will be created for the scene. If the value is close to 1 more billboards will be created and the leaves can be mapped to a closer plane. However, the user can also set a maximum number of billboards allowed to make sure there's a certain geometry complexity limit. 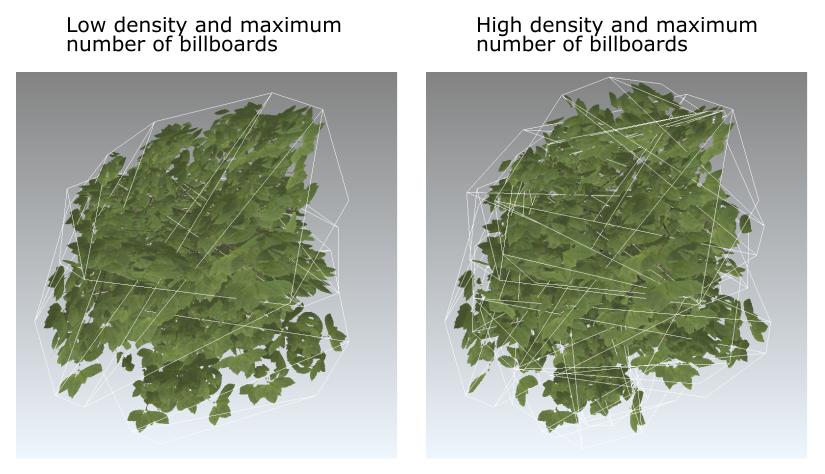 Billboard density applies to both Billboard modes: Outer hull and Foliage. Billboard density determines the (inverse) maximum allowed distance from the original asset to the projection on the billboard. The closer the density is to 1, the less the maximum distance becomes.

Having a Larger density results in a smaller projection distance (or smaller maximum deviation) meaning generally that more planes are needed. 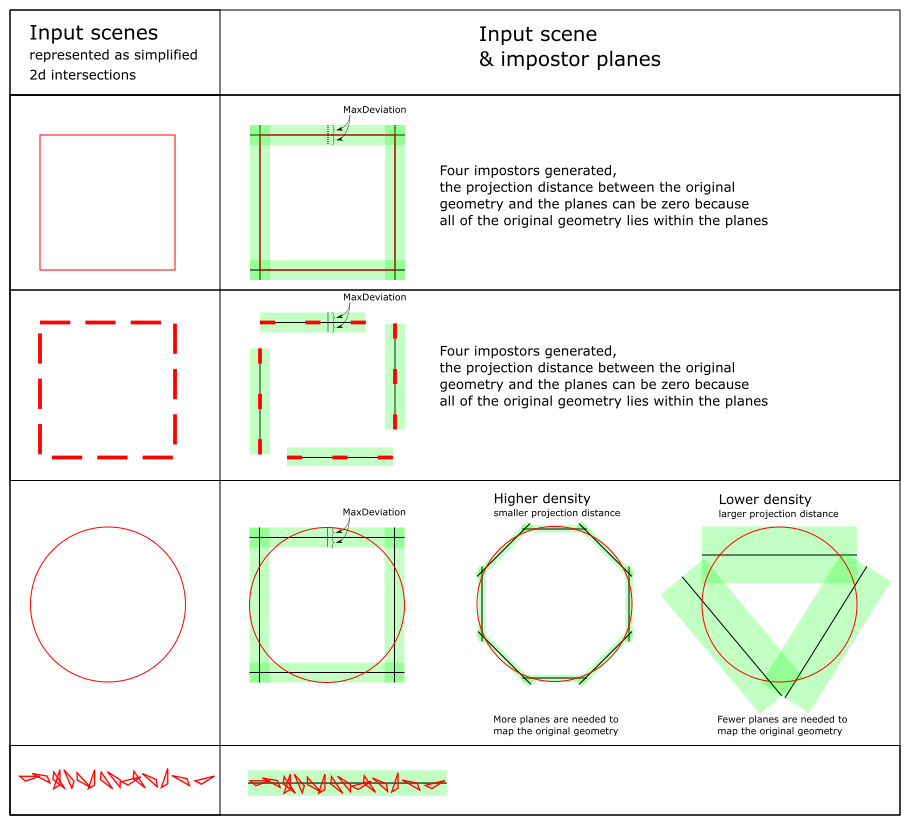 Billboard complexity applies to both Billboard modes: Other hull and Foliage. The billboard's outline takes the shape of its projection. There's a tradeoff between reducing overdraw and reducing geometric complexity. The billboards require more triangles to have a tighter geometric fit to their projection. The tradeoff is controlled with the setting: Geometric Complexity.

The Flip book impostor replaces the scene with a single quad that is always oriented towards the viewer around the up-vector. The quad is textured with the original scene rendered from a similar view. The flip book generator renders the original scene from a number of views and concatenates the images into an atlas per channel. Every view is rendered at the same size making indexing a view from the finished atlas predictable. The generator also creates a single square quad positioned at the center of the scene scaled to fit an orthographic projection of the scene from any angle.

The user decides the amount of views to render. The output texture is always a square therefore the number of views is also a square number. When rendering the quad, select the view from the texture atlas that closest corresponds to the current direction.

# Impostor from a single view

These impostors can be created for a model if it will be viewed from a distance and from a certain direction. 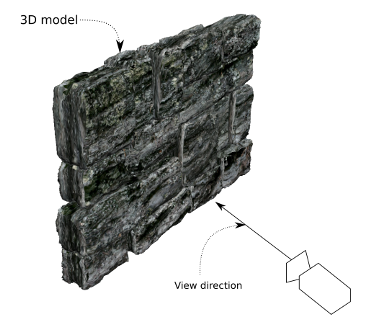 The Impostor processor works with: